Empowering you to make the right decisions for your business

Empowering you to make the right decisions for your business 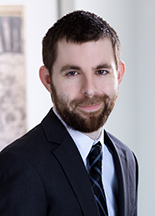 Erik specializes in commercial real estate and corporate transactions. Erik graduated from the James Madison College at Michigan State University in 2008 with a double-major in International Relations, and Political Theory and Constitutional Democracy. In 2013, Erik received his law degree from Wayne State University Law School, where he was named a Dean’s Scholar and was awarded a scholarship for excellence in academic performance for each of the three years he attended.

Prior to joining Jacob & Weingarten. Erik was in-house counsel at Bedrock Detroit (formerly known as Bedrock Real Estate). While at Bedrock, Erik’s responsibilities ran the gamut of the wide spectrum of legal work that comes along with being in-house counsel for a large and rapidly expanding commercial real estate company, but his work primarily focused on acquisitions, leasing, and property management. Erik was heavily involved in the acquisition of over 30 of the most iconic commercial properties in Detroit, including One Campus Martius (formerly the Compuware building), Ally Detroit (formerly the One Detroit Center building), Book Tower, the David Stott Building, and many others. Erik was also instrumental in the complex acquisition of a 300,000 square foot mall in downtown Cleveland known as the Avenue of Shops.

Erik is also active in several attorney organizations. Erik sits on the Board of Governors for the Metro Detroit division of the Delta Theta Phi Law Fraternity, and is a member of the Legislative Committee for the Real Property Law Section of the State Bar of Michigan.